Hello, True North movement fans… we’re back with another entry in our What the Fundamentals? series.

Today we’ll be looking at the “pull”. The pull often gets the short end of the stick when compared to the “push” for a few reasons:

But for all of these aforementioned issues, plus any others that we didn’t think of, it’s that much more important to ensure that you’re doing some form of pulling during your training – and that you’re doing it right.

The TRX is a fantastic tool for horizontal pulling because all you need to increase/decrease the difficulty is to move your body closer or further away from its “anchor point” (where it’s hanging from).  We start with what’s known as the “high row” – “high” referring to the angle from the back of the head to the back of the heels. When someone is able to complete a decent number of repetitions, we’ll get them to move their feet to directly under the anchor point, and build some endurance in the “low” rowing position – with the next step to move the feet forward yet again and be hanging almost (though not quite) directly underneath the anchor point (what we call the “inverted” position). 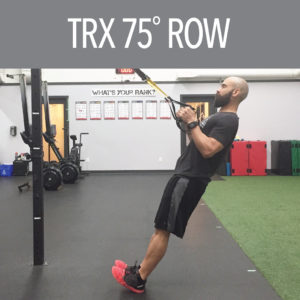 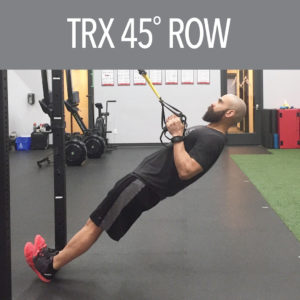 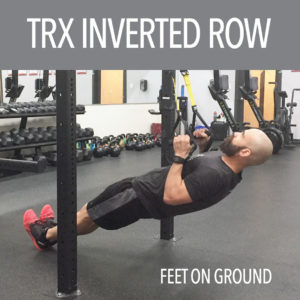 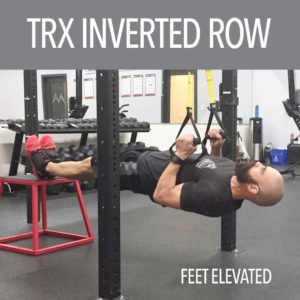 The markers for a good repetition do not change from one position to another, but the difficulty in maintaining them does. What you want to focus on is holding a solid plank throughout by squeezing the glutes, flexing the quads and abs – thereby not allowing the hips/glutes to sag at the bottom of the row, but also not thrusting the hips forward in an effort to pull yourself up. Generally speaking, we only want the upper arms to be slightly past parallel to the body – we don’t want to see the shoulders roll forward in an effort to get the hands to the ribs – and we definitely don’t want to see the person poke their chin forward as they pull themselves up.

Give these a try – a general guideline we use is that if you can do 3 sets of 8-10 repetitions without a loss of form, you’re ready to progress to the next level. Feel free to share this with anyone might be interested, and let us know how your rowing efforts are going!