Hello, all you wonderful True Northers – we’re back with another entry for our What the Fundamentals (aka WTF) series… and this is a SUPER important one.

So let’s talk about the KETTLEBELL CLEAN.

Firstly – why is this such an important movement skill? Well, it’s because the Clean offers so many functions when working with the kettlebell:

Secondly, we’d be remiss if we didn’t note that we utilize two types of Cleans – the Standard Clean, which is driven by the hips (hinge), and the Dead Clean, which generates its movement and power from the quadriceps (squat). For simplicity’s sake, we only specify the Dead Clean in our programming – if it’s simply referred to as a “Clean” then you can safely assume it’s the standard variation.

Now, here’s the thing – although it is a critical kettlebell skill to learn, and one that you want to “master” (okay, learn to do properly 90% of the time, if not ACTUALLY mastering it), it is also one of the most technically finicky movements to figure out. But take heart! Although in the short term you may have the occasional bruise from the ‘bell banging into your wrists while you learn the timing and rhythm, it’s a) normal, and b) a good bit of physical reinforcement for when you’re doing it right!

To try and help steepen the learning curve, here’s one of the progressions you can use to “clean up” your clean! (Sorry, I had to go there…)

Start off by mastering that two-handed kettlebell swing. Remember, this is one of the three pillars of kettlebell training, along with the Goblet Squat and the Turkish Get Up, as virtually all other movements will stem from these. We have two separate “WTF” posts on mastering the Swing, and we highly recommend going through those first. You can find them here and here. 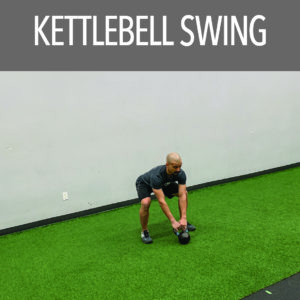 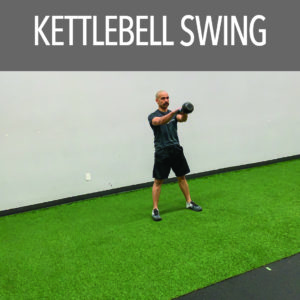 Next step – once you have the two-handed swing down and can consistently create the power and energy through the hips and NOT through the low back or quadriceps – then move onto the single-handed version of it. This adds an “anti-rotation” element into the movement, as having only one hand on the weight means that the movement of the kettlebell will be pulling that hand forward – and you have to “pack” that shoulder back to keep everything square and in line. Address the ‘bell to start exactly as you would for a two-handed swing (we’ll often even have people place the free hand lightly on top of the working hand just to line it up properly) and then concentrate on doing everything else exactly as you would with two hands on the handle. Note: like Ricky Bobby in “Talledega Nights” you won’t know what to do with the freehand during the swing; don’t worry about it for now. Let it find its natural (for you) rhythm and focus on the other parts of the swing. 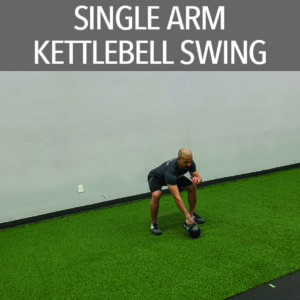 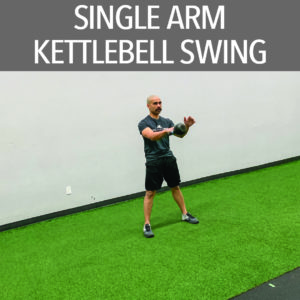 The other element that you could be working on simultaneously is the single-arm Dead Clean. Now, as we mentioned earlier with the “dead” variations the movement of the ‘bell is vertical (straight up and down) rather than in a front-to-back swing. So it’s not an exact transfer of movement skills but what it can do is teach you a) how to keep the kettlebell close to your body and b) the timing/loose grip needed to allow the kettlebell to swivel in your palm and finish in the racked position without banging your wrists. Line yourself up right over top, with the kettlebell between your feet and the handle bisecting the middle of both. SQUAT down (don’t hinge) and grab the handle. Make sure your arm is extended before you start the movement, then explosively drive the heels into the ground and stand up fast. As the ‘bell comes up (with the energy being created by the LEGS, not by curling it) pull your elbow back so that the kettlebell continues traveling upwards close to the body; as the ‘bell continues, “punch” the hand forward and up while allowing the kettlebell to swivel in your palm, and finish standing tall with the kettlebell racked in the front position. To return to the starting position, do a slight wrist flick to move the kettlebell slightly away from the body, then keep it close and guide it back down to the ground. 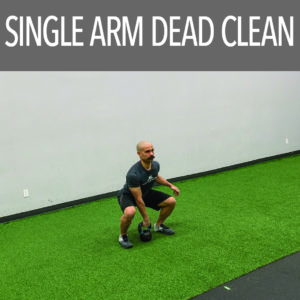 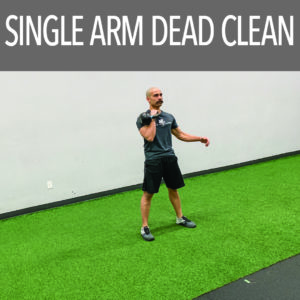 And finally, put it all together. Address the ‘bell-like you’re going to do a Single-Hand Swing, hike it back and drive the heels into the ground as you aggressively move into a standing position. The kettlebell will come through as it would for a swing, but instead of letting it move out and away from the body, pull the elbow back slightly before immediately “punching” the hand forward and up, finishing in a solid front-rack position. Pause, then pop it out with the slight wrist flick, keep it close to the body as it moves down, and then, instead of letting it reach the ground, pull it back between the legs and into the Single-Hand Swing movement.

You are now doing the Kettlebell Clean!

*True North Strength and Fitness members have access to online tutorials of the Kettlebell Swing and the Clean, which go into far greater detail on video. If you’re a True North member and haven’t received your access code, just let us know!