Hey there, True North FUNdamental Fanatics – we’re back with another entry in our What the Fundamentals? series!

In a previous post, we spoke about how learning the HINGE is a key element that will lead to a number of different movements, one of which is the KETTLEBELL SWING. That being said, this post is going to offer another pathway to the swing, but with an important additional element to learn how to perform a hinge in a controlled yet explosive manner.

The first part that we need to get sorted is the beginning and the closing position. Back in our original certification (the Hardstyle Kettlebell Certification, or HKC, back in 2011) they drilled home the point that the start and the end position if done right, are virtually interchangeable. In other words, when you perform the swing, if someone were to take a picture of you right before you start the movement, and then right as you finish (“parking” the kettlebell), you should not be able to tell the difference between them.  At True North, we practice this using what we call the “Hike Pass” (not our name, though we can’t quite remember who it was that we learned that from). For this, you get yourself set and ready in the starting position, then perform a series of “hikes” – bringing the arms to the ribs and thus, the kettlebell back fast –then returning to the original position, all with little to no movement anywhere but the arms. Doing this helps engrain this position and reinforce where you want to start and finish. When practicing, we keep the repetitions low – 3-5 at a maximum – so that you don’t lose focus and start to work with sloppy form. 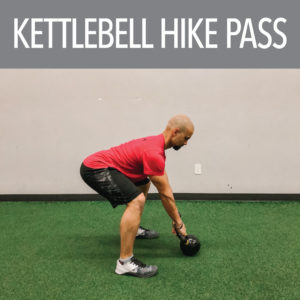 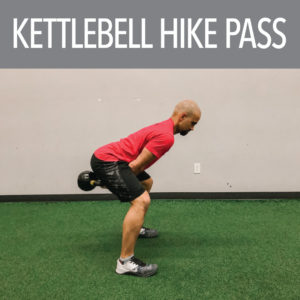 The second thing we want to focus on is using the hips as the driver, and not the quads/knees or arms/shoulders. In order to differentiate the movement, we’ve started using what we’ve called “The Pendulum Swing” – and although we’re guaranteed not to be the first to think of it, having not seen another example this was the name we came up with.

To perform the Pendulum Swing, start in a fully upright posture, with all of the joints “stacked”; in other words, make sure that your shoulders are directly over the hips, the hips over the knees, and the knees over the ankles. Any variance from this “stacked” posture can create a leak in stability or control, so it’s important that you are able to find this position in a static position before you try and do it as part of a larger, more explosive movement.

Next, keeping the arms straight and pulled against the body (but without rounding the shoulders forward), rock the hips back a few inches and then pop them forward – the kettlebell should jump forward off the hips a few inches. Make sure that you’re not moving the kettlebell with your arms – rather, let the arms follow the momentum of the kettlebell. As soon as the joints are stacked, tighten up the ol’ “triple threat” – your abs, quads, and glutes. Doing this in one sharp movement (even better when it’s timed with a hard, short breath) will ensure that strong and stable trunk we mentioned previously.

Once the kettlebell reaches the top of the swing (on the first couple, it will not be very high), let it swing back and when your arms again touch your ribs, sit back into the hinge and “catch” the kettlebell to slow and stop its backward momentum, then pop them forward again. Keep doing this, getting more and more momentum from the swing but being sure that at the apex of each one you are locking out the “triple threat”. Once you’ve done 3-5 full swings (the kettlebell reaches chest height), slow and stop the kettlebell’s momentum before coming to a complete stop. 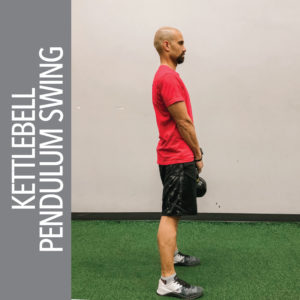 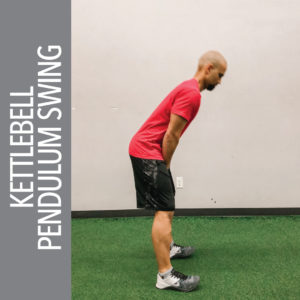 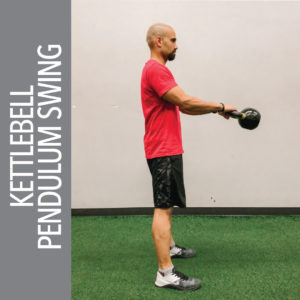 Keep practicing these two movements separately, and once you’ve gained a decent amount of competence with each, try putting them together – perform the Hike Pass, making sure it’s fast and powerful, then drive the hips forward immediately into a Pendulum Swing – complete about 5, then return the kettlebell to its starting point with the finish of the hike pass (it should glide in like a plane coming for a landing, not drop straight down with a “thud”). 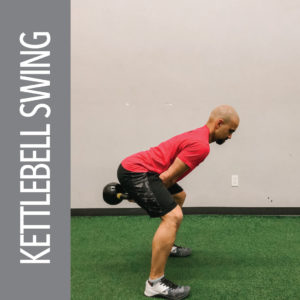 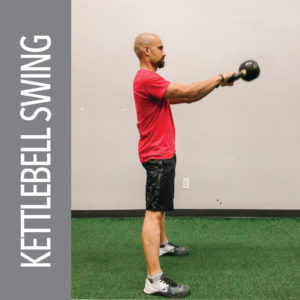 Congratulations – you just learned how to do the coveted Kettlebell Swing!

*True North Strength and Fitness members have access to online tutorials of both the Hike Pass and the Pendulum Swing, which go into far greater detail on video. If you’re a True North member and haven’t received your access code, just let us know!